How else can colloidal silver particles get into the body?

Colloidal silver can enter the bloodstream directly by at least two different means. The first is through the lungs by using a nebulizer to convert the colloidal silver into micron size droplets and then inhaling these droplets. The small size of the silver particles and silver ions will pass through the lung tissue directly into the bloodstream. Once in the bloodstream, the particles will circulate with the blood but the ions will immediately combine with the plentiful supply of chloride ions in the serum. Human blood serum contains a large quantity of sodium and potassium chloride. The chloride ions are present in the serum in high concentrations, typically 3500 ppm. The chloride ions immediately combine with the silver ions to form silver chloride. The large silver chloride molecules will be removed from the bloodstream by the kidneys and passed out of the body in urine. 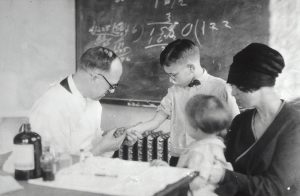 Because the silver ions cannot exist for long in the human body regardless of the entry mechanism, they really represent an undesired byproduct that is passed from the body as waste. The ideal colloidal silver would maximize the percentage of particles and minimize the percent of ions. Since typical colloidal silver products contain a very high percentage of ionic silver, there is a lot of potential for improvement by reducing the ionic content as close to zero percent as possible.