Silver ions in a solution cannot exist without water, so when the water is evaporated the silver ions (cations) must combine with an available anion to form a compound. For example, if the predominant anions present in a silver colloid solution were hydroxide and carbonate, the compounds thus formed upon evaporation would be silver hydroxide and silver carbonate. Silver hydroxide is unstable and reduces to silver oxide and hydrogen. The silver carbonate will reduce to silver oxide and carbon dioxide. The final compound that remains after evaporation is silver oxide.

The process begins as a single silver ion is attracted to a single anion, forming a single formula unit of the two species. This formula unit is electronically neutral and has no ionic charge and therefore causes no repulsive force. The lack of repulsion causes the anion-cation pairs to be attracted to each other by van der Waals’ force of attraction which causes them to aggregate and form a three-dimensional orientation or crystal as the solvent evaporates. The size of the particle growth is limited by the reduced mobility of the molecules as the water evaporates. What remains is particles of silver oxide whose diameter is 1 – 3 nanometers. It is these particles which predominate in TEM images made of silver colloid solutions which have a high ionic content. 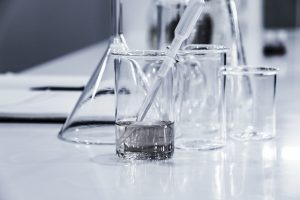