Some producers of colloidal silver add substances to their product to prevent the particles from settling. When colloids contain particles that are too large to stay suspended as a result of the mutual repulsive force protein additives will help to keep the large particles from settling. It is sometimes called “mild protein” or “mild silver protein”. Such additives would not be used in a quality colloidal product because high-quality colloids will not settle.  A good analogy would be to tie a balloon to a brick to keep the brick from sinking. Adding protein to colloidal silver is also potentially unsafe. Professor Ronald Gibbs discussed this fact in his booklet “Silver Colloids“. He found “mild silver protein” products that had live bacteria growing on the protein. This can happen when protein is mixed with colloidal silver because the protein molecules are large and encapsulate the silver particles which prevents the silver from reaching the bacteria in order to kill it. Normally, it would be impossible for bacteria to live in colloidal silver, but it is common in products containing protein. Professor Gibbs recommended that such products should be avoided. Common protein additives include Knox gelatin and casein protein. Knox gelatin is an animal-derived protein. 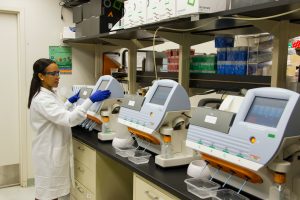 Here is the quote from Professor Gibbs book concerning use of protein to stabilize colloidal silver.

“A fifth sample considered showed fuzzy clusters around silver particles when viewed in water [Figure 3A]. Because these clusters resembled bacteria, a special staining technique was utilized to confirm the impurity. The sample was injected with live cell nucleic acid stain [STYO 13] which is taken up by live bacteria and shows as bright green when viewed using a 500 nm-long pass emission filter for fluorescence detection. As suspected, this fuzzy material fluoresced indicating the material was, indeed, live bacteria growing on the gelatin that had apparently been used to stabilize the colloidal silver suspension. In Figure 3A the black dots inside the fuzzy mass are the silver particles. This sample exhibits the poor quality control that is totally unacceptable in this type of product. This sample was removed from further consideration and analysis.“